Following the aim to explore the landscape between ‘users’ and ‘developers’ on digital tools, PIPES_BCN organized on November 7th a mixed experience inviting people prom Constant, a Brussels’ based association for Arts and Media, and design caravan OSP, in the framework of the Free Culture Forum.

The workshop reflected on the necessity of shift out our digital practices away from the pressures of meritocracy and the limits of the technocentrism, and the need to make tools together.

Participants were diverse, coming from graphic or fashion design, art, architechture, culture theory or activism. After the introductions, Femke Snelting from Constant, highlighted that design can be regarded as a strategy driven by tools which must be considered: they somehow channel experiences and expectations, and they condition the way we work. In this sense, Femke said, when we speak about tools we’re also talking about interfaces, so we have to blur the line between them.

After displaying this first thoughts, pals from Open Source Publishing Gijs De Heij and Eric Schrijver presented Visual Culture, a tool / interface that comes from the world of programming to share and publish any design project with the possibility to see and retrieve any previous version. Visual Culture provides an archive, a tool to publish and a tool to collaborate and share based on Git versioning software.

In this online software, each project is explained and each step is recorded, so a biography of those projects is built, basing future conversations. Through Visual Culture people can share their creative process on the web instead of taking it for itselfs. Knowledge is shared and exchanged, because it invites participants to create open source projects, so everyone can download it.

Saying so, the Tool Parade was launched, focusing on three different tools:

Participants separated in groups that tried and reflected on this tools according to their interests. The team that used etherpad-to-graphviz tried to represent a conversation between persons. As it works with coding language, they learnt the amount of layers between people and machines, and realized that average people don’t use the same languages as machines.

The second team worked on html2print, a tool that links web and print which can display text, code raw and print format. Using this, they tried to answer some of the questions setted for the workshops (as: is this a tool or an interface? How do you use it, or would you want to use it? Who has made this tool/interface, and why? among others). Team concluded that there’s a change on design: print design thinks on a static canvas, thinking first on a space and then organizing it. On web content is more fluent, and the design is thought taking in account dynamic issues. Similar to this software, OSP developed Ethertoff, a simple collaborative web platform, much resembling a wiki but featuring realtime editing thanks to Etherpad. Its output is constructed with equal love for print and web. Based on this, there’s an other software avaliable at f-u-t-u-r-e.org where users can change design and content and printing it in pdf.

Regarding to Feed-to-be-fed, the participants talked about the tool as an open interface where people can collaborate in real time uploading videos from it’s computer, creating a collaborative work settled in the public space.  During the conversations, several points related to the future interface manifesto appeared. 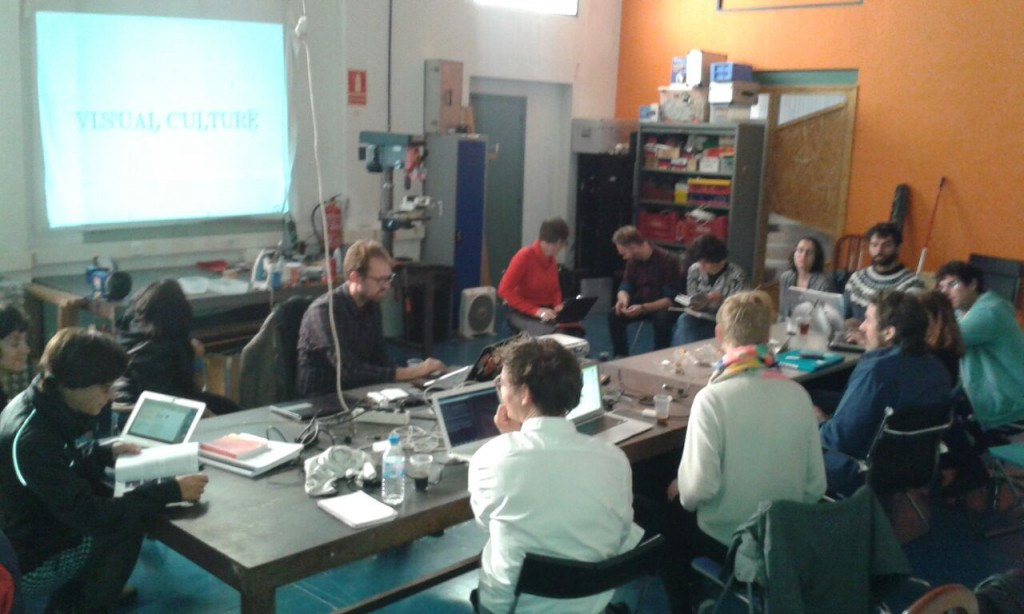