“The strength of new materialism is precisely this nomadic traversing of the territories of science and the humanities, performing the agential or non- innocent nature of all matterthat seems to have escaped both modernist (positivist) and postmodernist humanist epistemologies”.

The occidental thought tradition is mainly based in dualities. Many philosophers have criticized this binary logic, settled with the beginning of the modern project. However, this more systemically or net-oriented way to perceive the world has been peripheral until this last years.

Taking advantage of the convergence of interests with PIPES researchers, this Tuesday 20th of May, Hangar hosted for the first time the seminar Art Matters, lead by the philosopher Pau Alsina. The seminar has been held for two yearsand a half, and it turns arround about breaking down the barriers between learning, reflection and making: it depicts and reflects the need to create convergence zones between the own investigation and the artistic practice.

In the introduction, Alsina depicted some of the dualities that must be reviewed, like society – technology, science – humanities or culture – nature, and he contrasted them with the concept of “virtual” in Deleuze, which highlights the relation between matter and shape through the idea of morphogenesis. Other relevant authors that are usually discussed on the seminar are Foucault, Latour, Callon or Stenger, and the main concepts and approaches are actor-network theory, speculative realism or object- oriented ontology.

In this occasion, the attendees were nine people coming from art history, design, media art, politycs, SST (society, science and technology studies), or sociology, and the discussion focused on New Materialism, departing from the text “The Transversavility of New Materialism”. This chapter form a book published in Open Humanities Collection, is written from a double philosophical perspective: science and feminism.

The main idea is to put the materiality on the centre of the philosophical discussion, putting aside the idea of subject. An example:

“A piece of meat activated by electric waves of desire, a text written by the unfolding of genetic encoding”. Braidotti 2000, 159

This quote shows a political position asseting that materiality neutralizes the “alterity”, setting aside the cultural factor. As the Brazilian anthropologist Oliveira de Castro affirms: “there is just one culture, but several natures”: the culture is what is different, and the nature is just the same thing. Also exchanging the roles and transversalizing the concept of gender, Donna Haraway fuses science and nature when she assets that the woman can be conceived as a cyborg, because she’s always been a machine of pleasure, or a machine of biologic and working force reproduction. In the same way, Manuel DeLanda, in A Thousand Years of Nonlinear History (1997), builds a neomaterialtic history from the point of view of volcanic magma.

Although these were just some ideas about the rich discussion of the seminar, they can help us to think about how can we blur the distintions between rational or irrational, or modernity and postmodernity, to think about our complex reality from a new perspective. 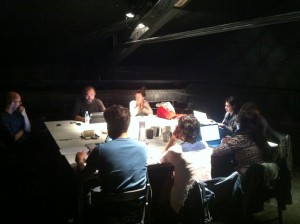